The aim for the establishment of this project(Ombili foundation) was to provide a suitable home to the San people. To provide education and health care. Since Namibia was and is still moving to modern and commercial ways, the old ways of hunting and gathering for a living was fading. Ombili managements are holding hands to make sure this project runs for a longer period of time. It will need all the support and sponsorship it can get from anyone willing to assist in making sure that this wonderful ethnical group's inhabitant, culture and social recognition is not lost. 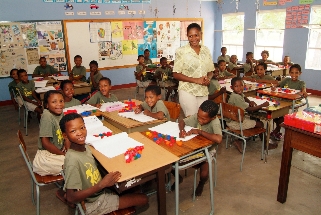 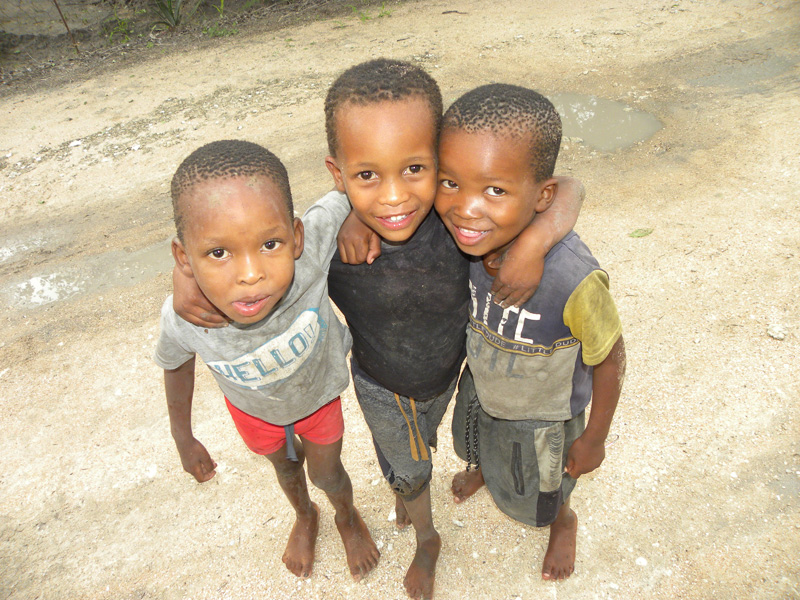 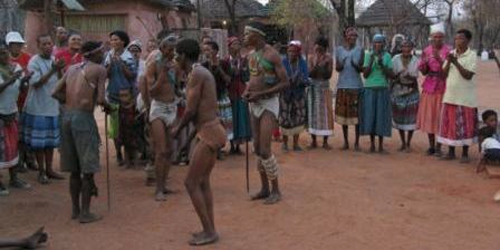 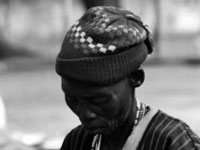 On the site of a former farm in Namibia, the Ombili Foundation is trying to enable the Khoi-San (Bushmen), who are threatened with extinction, to live in our world.

The aim is to preserve the centuries-old traditions of these indigenous African people in a changed environment. The project is supported in hygienic and medical as well as in social and educational matters by the "Freundeskreis Ombili Berlin- Brandenburg e.V.".

In September 2000 we, that is two married couples and a close friend, crossed Namibia in southwestern Africa with two pickup trucks. It is hardly possible to describe this impressive country with its endless expanses, spectacular landscapes, its eventful history and above all its interesting friendly people of different descent and skin color. However, the visit of the Ombili Foundation left the deepest impression on all of us. The Ombili Foundation is trying with great commitment to make life possible for a group of Khoisan (Bushmen) in the north of Namibia on the site of a former farm.

The San are the oldest known indigenous people of southern Africa, whose way of life has hardly changed over centuries and whose existence as a tribe is threatened with extinction. These hunter-gatherers of the Kalahari cannot survive in their traditional way of existence in our millennium. Due to the settlement structures with the division and fencing into farmland, the San's habitats for hunting and gathering roots, plants and nuts no longer exist.

It is difficult to make a smooth transition into modern times for a people who have lived completely different ways of life compared to our traditions for centuries. Also the enormous knowledge of these people about the connections in nature would disappear with their extinction.

The San lived in groups of about 30 people, moving through the vastness of the Kalahari with their belongings, which usually weighed only about 10 kilograms. Everything they killed in game and gathered in fruits was shared in the clan. We became very thoughtful as we gained insights into the San's philosophy of life. Surprisingly for our culture, the words "please" and "thank you" did not exist in the language of the San, because helping and supporting each other are taken for granted and no words are necessary. The San way of life consists in reducing life to the essentials. Wealth is not found in possessions but in the cohesion of the clan, in sharing with like-minded people.

Ombili, the name means peace, started his work in 1989 about 200 km north of the current location of the farm Hedwigslust. This farm was given to the Ombili project in 1990 by the then owner Klaus Mais-Rische. It gave 300 San a new home. The garden was cleared, grass huts were built by the San, mud bricks were made by the San themselves, a school, teacher houses and a community center were built. The first school classes began in 1993 and a kindergarten opened in 1994. Teaching is difficult because there are hardly any trained teachers who speak the San languages.

3,330 hectares of farmland are available to the Ombili community for growing millet, beans, gathering berries and fruits, horticulture and fruit-growing, timber extraction and cattle breeding.

Meanwhile, about 600 San live at Ombili in the three villages of Otjolo, Nepara and Olakula. They belong to the !Kung and Hai//om and speak their own language.

In 2004 the first mud houses were built and in January 2005 a dormitory was opened for the children of remote clans.

For medical care, a small outpatient clinic has been established, run by a San as an assistant nurse. From time to time, a nurse from Germany also worked on site, and doctors from the circle of friends from various specialties provided support primarily in prophylactic matters. Nurses from the state health service come to carry out vaccinations, for example, and state doctors carry out prophylactic eye examinations. A san of the foundation trained for this purpose is responsible for organizing tuberculosis diagnostics and therapy. The nearest doctor is in Tsumeb, about 90 kilometers away. The women give birth with the help of their tribal sisters (home births). Diarrhea, injuries, malaria and skin diseases are major problems. Life expectancy of the San was only 45 years in the past.

Impressed by the philosophy of life of the San and the great commitment of the staff of the Ombili Foundation, we five visitors (including three doctors) decided, while still on site, to do our utmost to support the community of Ombili, especially in the medical and hygienic field.
In November 2000, we founded the "Freundeskreis Gesundheit für Ombili Berlin Brandenburg e.V.", which, due to the expanded range of assistance, has been called "Freundeskreis Ombili Berlin - Brandenburg e.V." since 2019 and now has 23 members. Since then, we have been supporting specific work areas and projects in consultation with the foundation's staff.

Through our annual benefit concerts and other events, we were able to achieve a lot, not only that in the meantime every San has his own blanket, the children have shoes in the cold African winter, malaria diseases could be treated, mosquito nets and gauze windows were purchased for the dormitory, but also that with the help of numerous supporters and through sponsor runs of some schools in Germany for the Ombili elementary school two new classrooms, a library, three new teachers' apartments could be built, as well as a new tractor and a new pickup truck could be purchased for the foundation, which now replace the old, no longer functional vehicles. Twice, with the support of the German Air Force, it was possible to send donated relief supplies such as hospital textiles, towels, balls for the children and other items to Namibia. We also repeatedly organized and financed transports in overseas containers with relief goods such as school furniture for the new classrooms and the library and tables for the dining room of the hostel (boarding school). An additional big help is the regular provision of transport capacity by HILFE FÜR NAMIBIA e.V. from Peine-Röhrse with Hans-Werner Behrens and its 200 members.

Another way to help the San is by selling their handicrafts (animals carved from Tamboti wood, baskets woven from leaves of the Makalani palm, necklaces made from ostrich eggshells, wooden beads, Makalaninuts, mobiles for children and much more) at various markets in Germany, during our benefit concerts and other events. A great support as distributors are also the Friends of the Zoo Basel and the Leipzig Zoo.

Ombili's large impressive fruit and vegetable garden contributes to the self-sufficiency of this food for the kindergarten children, students and the hostel.

But Ombili still needs outside help for its development. Besides the support of our circle of friends, many individual donors, companies, Lions and Rotarians, world stores and schools, the community is supported. A particularly close cooperation connects us with the Ombili circle of friends from Northeim.

Many simple everyday things for us are still in the realm of pipe dreams for the San of Ombili.

Our circle of friends would be very happy if this information about the Ombili Foundation would help us to find more supporters. We would be very grateful for any contact.

"It is much better to light a light than to lament the darkness of this world" wrote by a visitor to the Ombili Foundation.